A CD R or CD recordable is a write once format that can be used for digital scrapbooking storage or storage of any other type of digital information.

The discs are purchased as blank CDR media and then information is recorded to them. The information, once recorded on this type of media, cannot be erased and when the disc capacity has been reached no other information can be recorded onto the disc. 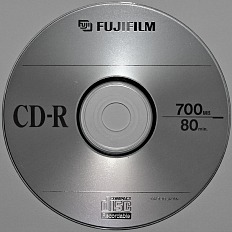 These recordable media come in the 650 MB capacity, which was the initial standard, and in 1998, the 700 MB capacity (the de-facto standard) was introduced. Initially, there were significant compatibility issues between the 700 MB higher capacity CD-Rs and various recorders and readers. Over time, this compatibility issue was resolved, but some of the early 700 MB CD-Rs, particularly those before year 2000, may pose some problems when trying to read or play them.

The initial recording speed of this type of disc was 1x when the media first hit the marketplace in 1990. However, as advancements in the technology progressed, the recording speed increased to 2x (1991 to 1993), 4x was introduced in 1995, 8x appeared in 2000, 16x in 2001, 24x in 2002, and 48x recording speed discs in 2003. By 2009, the maximum rated speed for recording this media was reached and is 52 times. Despite this speed rating, most burners or recorders never actually reach recording speeds associated with a 52x speed. Nevertheless, recording a CD-R to full capacity will not take more than a minute or two when the recorder speed is set to maximum.

In order to achieve recording on CD media, a different technology and disc structure is required when compared to the read-only CDs such as the audio CDs. A schematic of a cross-section of a CD-R disc is provided below. 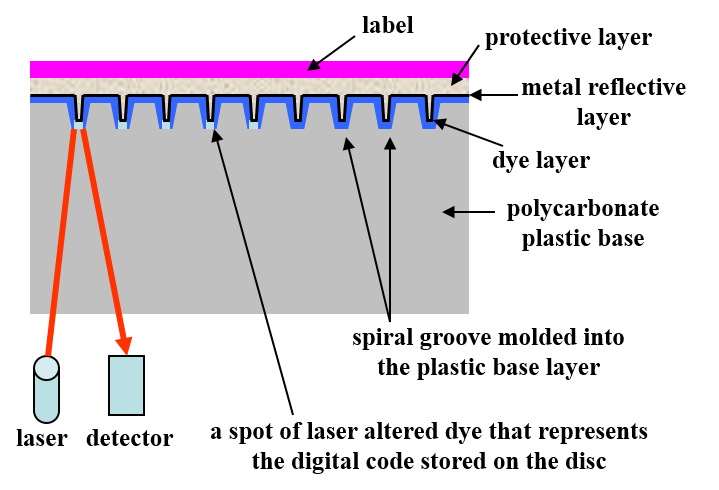 A CD R consists of a clear polycarbonate base layer, which makes up most of the disc thickness. For read-only CDs, pits or indents which represent the digital code of the stored information are molded into the top of the polycarbonate. For CD-Recordable media, there are no molded pits. Instead, a spiral groove starting from the inner portion of the disc and ending at the outer portion is molded into the top of blank CDR media. The recording and reading laser light follow this spiral groove when the disc is being used.

The next layer that lies on top of the polycarbonate plastic base and spiral groove is a dye layer and this is where the digital information is stored. When blank recordable CDs are being recorded, the laser light alters the dye in very small spots inside of the spiral groove. These small spots represent the digital code of the stored information and are the equivalent of the pits or indents in read-only CD media.

For CD-Rs, there are three types of dyes that are used:

The next layer in a CD recordable is the metal reflective layer. When a recordable CD disc is being read, the laser light shines through the base of the disc (non-label side), hits a spot or non-spot area in the dye layer, and then hits the metal layer. The laser light then gets reflected back to create a signal that in turn constructs the digital code of 1 or 0. The metal layer in CD recordable media can be silver, silver alloy, or gold. Gold is by far the most stable and will not oxidize when exposed to environmental pollutants. For the long term storage of digital scrapbooking projects or other files, CD-Rs using gold metal are recommended. In fact, the best combination for maximizing stability and longevity is a disc with a phthalocyanine dye and gold metal layer.

Depending on the dye and metal layer combination, recordable CDs appear different when looking at the base of the discs and this appearance can help determine the disc composition and its stability.

This disc appears gold in color with light reflected off of the base and light green with light transmitted through the base. This is the most stable disc and only produced by a couple of manufacturers one of them being MAM; they are quite a bit more expensive than the average CD R. The lifetime of this disc is very high and considered to be at least 100 years and likely more.

This disc appears very light green color with light reflected off of the base and with light transmitted through the base. The dye stability is excellent but the metal layer is vulnerable to oxidation in polluted atmospheres. It is the most common type of recordable CD found in the marketplace. Because of the less stable metal layer, the longevity of this disc is in the 50 to 100 year range. However, if the storage environment is very poor with pollutants around, the lifetime may be significantly reduced. This is the disadvantage of using a non-inert metal reflective layer.

The appearance of this disc can be various shades of blue with reflected or transmitted light. It has poor stability relative to the two types of discs discussed above as both the dye and metal layer can be reactive under certain storage conditions. The average lifetime of this disc is 20 to 50 years. Most of the CD Rs of this type would be in the lower end of this range.

This disc appears green with light reflected off the base and blue with light transmitted through the base. It has excellent metal stability but the dye limits the lifetime of this type of CD R. This dye and metal layer combination is not very common and likely only found in the early days of CD-R manufacturing. The average lifetime range is 20 to 50 years.

This disc appears deep blue in color and possibly other shades of blue whether viewing the disc with reflected or transmitted light. This type of recordable disc has less stability than phthalocyanine dye discs. One manufacturer typically makes this type of disc (Verbatim). The azo dye and silver metal layer disc has an average lifetime range of 20 to 50 years and most would fall in the lower end of this range, assuming storage under standard room conditions.

Occasionally, you may encounter a CD-R that when viewed from the base is a different color than what is mentioned above. The most common non-standard color is black. An example of this type of recordable CD is provided in the image below.

These types of discs are not using a different dye than the ones mentioned above. Instead, the manufacturer of this disc has simply pigmented the plastic base to appear different than the standard discs, likely for marketing purposes. Most of these "black discs" use the light green phthalocyanine dye and silver alloy metal layer. They would appear light green in color if not for the black pigmentation of the plastic base layer.

Top Side of a CD Recordable

To finish the disc structure, a thin lacquer layer is added on top of the metal to protect it from chemical and physical damage and then a label or printable surface layer is the final layer in the recordable disc structure.

The recordable CD can be used for effective long-term storage of digital information if the right type of blank CDR media is chosen. The one negative is the low storage capacity compared to some other storage media available nowadays. This is usually only an issue when storing video or very high quality digital photos.