CD RW discs are erasable or rewriteable optical disc media in the CD size format. This disc format is purchased blank and then users can add information to the CD-RW media. The advantage of this media is that it can be erased and reused.

The disadvantage is that in general the whole disc needs to be erased in order to add more information to the disc. However, certain burning software will allow the addition of more files or deletion of individual files without removing all of the previously stored information. This may or may not work well, but usually is not the way this format is used. 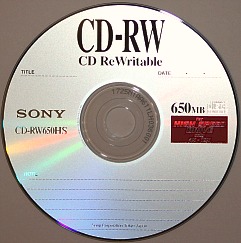 The erasable CD comes in two storage capacities of 650 MB initially, but now most CD RWs have a capacity of 700 MB.

The a cross-section of the rewriteable CD structure is shown in the picture below. This disc format consists of a polycarbonate plastic base with a spiral groove molded into the top surface of the polycarbonate. This is similar to the CD-R disc. 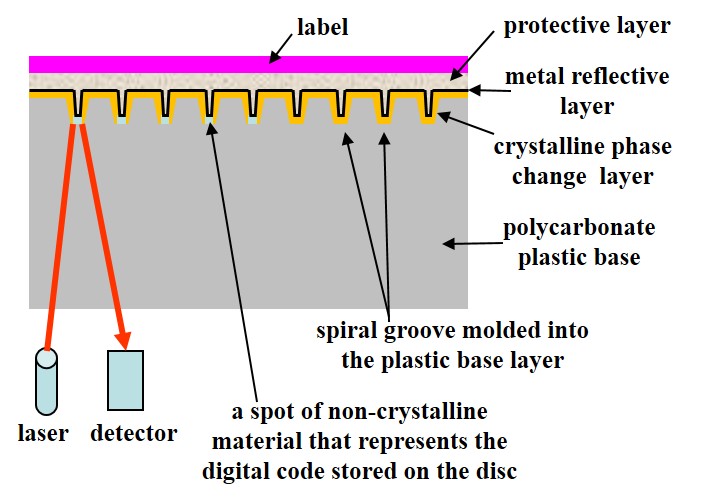 For CD RW media, the phase change layer is in a crystalline form when blank. When information is being recorded to this media, the recording laser heats the phase change layer to a high enough temperature to convert the crystalline material to a non-crystalline or amorphous state. Therefore, within the spiral groove there are small spots of amorphous material, which represent the digitally stored information, mixed in with crystalline regions that have not been altered by the laser light. To erase the disc, the laser heats the amorphous regions to a temperature that makes the spots turn crystalline again and indistinguishable from the rest of the disc. There is a limit as to how many times this can be done effectively, but this limit is not normally reached in typical use situations.

Like other CDs, the next layer in CD RW erasable media that resides on top of the three layers mentioned above is a metal reflective layer. In this case it is aluminum or aluminum alloy. Next, a protective layer is placed on top of the metal and then a label. Sometimes the disc has no labeling to indicate that it is an erasable disc. An erasable disc has a greyish appearance when observed from the base side. This grey appearance is significantly different than the greens and blues encountered with CD-Rs and all erasable CD media pretty much look the same in terms of color.

Erasable CDs are not suitable for the long term storage of information as these discs have shown lower stability than the CD-Rs, which use a gold metal layer and stable dye. A rough lifetime range, based on relative stability studies, is 20 to 50 years average if the discs are stored under recommended conditions. Most of the discs will be in the upper end of this longevity range. In addition, these discs can be erased or altered and therefore, the information stored on the disc can be changed.

Therefore, CD RWs are not recommended for digital scrapbooking storage. The primary intent of this format is to move files around from one computer to another or person to person. When used in this fashion the format is acceptable for everyday use.