There are other types of optical disk media in addition to CDs, DVDs, HD DVDs, and Blu-ray discs. These other optical discs have different sizes than the standard CD size of 12 cm or 4.75 inches and are different in structure and form than the CDs, DVDs, etc.

The Laserdisc is also known by many other names, such as the Laserdisk, Laser Video Disk, Laser Video Disc, video disc, LaserVison disc, LV disc, or LD disc. Philips introduced this first type of read-only optical disc in the 1970s. Manufacturing of the Laser disk was in three sizes, with the most common or standard size being 30 cm or 12 inches. Common usage of this format was for movies and a variety of other video applications such as music videos and training applications. For more information on this optical disk media type, visit the Laserdisc page of this website.

WORM is an acronym for Write Once Read Many times and its initial introduction was in the 1980s. These discs are like the recordable CD, DVD, and Blu-ray formats in that once the disc is full you can no longer record to the disc or erase the information on it and then reuse it. The WORM optical disc comes in a variety of different sizes with the most popular sizes being the 12 inch and 5.25-inch formats. Unlike CD-Rs, DVD-R, and some BD-Rs, which use dyes to store the information on the discs, a variety of different technologies have been used over the years to store information on these discs. Another significant difference with these other optical disks is that they reside in a special plastic cartridges. Because of this and other technological differences, these discs require their own drive and are not readable in standard CD, DVD, or Blu-ray drives.

The magneto-optical or MO disk is a non-CD size erasable optical disk format introduced in the late 1980s. Like the WORM disks, these discs use plastic cartridges and are not playable in standard optical disc drives. 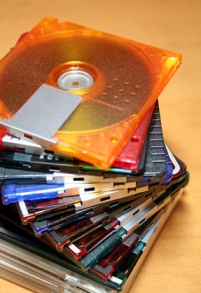 The common sizes for MO optical media are 5.25 inches and 3.5 inches. The image below is an example of a typical 3.5-inch magneto-optical disk. Note that a red laser writes and reads this disk format. A 2.5-inch version of the MO disk also exists. This disk was known as the Sony MiniDisc, which was a method for consumers to record music digitally. The intent of its introduction was to take over the audio recording market from the analog audio cassette tape. However, the popularity of the format was never great and sales never reached the predicted targets.

These are write-once or erasable cartridge optical disk formats like MOs, but read with a blue laser rather than a red laser. This means that these disks provide much higher storage capacity than the magneto-optical disks. UDO stands for Ultra Density Optical and Plasmon is the major backer and manufacturer. PDD is short for Professional Disc for Data and supported primarily by Sony. The actual disc size for both UDO and PDD is 5.25 inches.