What is a Hard Drive?

Very often, this is where digital scrapbooking projects are stored, because individuals create these projects on computers. However, computer hard drives are very versatile and storage of many other types of files and projects can occur.

For pre-1980s, what is a hard drive? IBM introduced the first hard drive in 1957 and it consisted of several large magnetic disks (24 inches in size). See the image below for an example of this early type of hard drive. 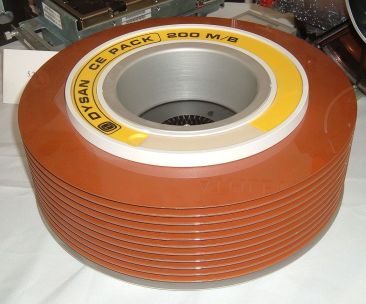 Fifty of these disks, used in mainframe computers at the time, could store only 5 MB of data. The structure of these early computer hard drives is a rigid platter (not flexible like the floppy diskettes) of aluminum alloy coated on both sides with a polymeric binder material containing magnetic iron oxide. The magnetic oxide gives these discs a brown appearance and it is the magnetic oxide particles which store the digital information as discussed in the floppy disk capacity page.

Nowadays, what is a hard drive? In 1973, IBM introduced the modern-day computer hard drive called the Winchester hard drive, which involves the use of smaller hard or rigid disks in a sealed enclosure. The structure is quite different than the older hard disks as shown below. 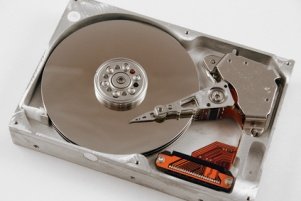 The capacity is very different as well. Initially, computer hard disk capacity was low, but it has increased steadily over the years and now has reached the 10 TB level and growing. This is a very large capacity and allows for the storage of large amounts of any type of digital files such as text, high quality photos, audio, and high definition video. Hard disks also provide very fast access and write speed when compared to other types of storage media.

Currently, there are five main hard disk drive manufactures: Seagate - Maxtor, Western Digital or WD, Hitachi, Toshiba, and Samsung. Several other companies purchase computer hard drives from these manufacturers and rebrand them with their company name. Prior to purchasing a particular brand of hard drive it is a good idea to consult hard drive reviews, which can be used to select the proper hard drive for your needs.

What is a Hard drive Failure?

What is a hard drive failure? Hard drive failures are often characterized as head crashes, but this storage medium can fail in other ways. Once failure occurs, there are certain utilities that can attempt recovery, but often the use of such utilities does not work. There are some basic free hard drive recovery techniques to restore hard drives.

When all else fails, there are hard disk recovery services that specialize in rescuing hard drives. In many cases, these companies can recover part or sometimes all the information on the failed drive. However, it can be expensive to go down this route. Note that attempting to open the hard drive casing without clean room conditions and without the proper expertise will contaminate and/or damage the disks and likely make any future recovery attempts impossible.