A hard disk crash or hard drive crash are terms used to generally describe the failure of computers, even though the failure could be due to the many other components that are responsible for the computer functioning.

Examples of these components are the CPU (central processing unit), the mother board, the power supply, the IDE (integrated drive electronics) controller, software, etc. 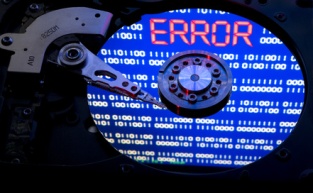 The actual hard drive or hard disk may fail for several reasons and the term hard disk crash refers to one of those specific reasons.

A hard drive consists of rigid disk platters coated on both sides with magnetic material, which is where the digital information is stored. One or several of these disk platters are found within a hard drive case along with various mechanical parts to make the drive function such as a motorized hub to spin the disks and very small magnetic heads to read the hard disks. There is one magnetic head attached to a moveable arm for each side of every disk within the hard drive case. Thus, a hard drive that contains two hard disk platters has four surfaces for storing data and 4 moveable arms with 4 read/write heads (one for each arm).

Functioning of a Hard Disk

The disks within a hard drive spin at very high speeds to be able to access data quickly and ensure software programs run smoothly. The speeds vary depending on the hard drive and size of the disks, but a common speed is 7200 rpm for hard disks slated for general use. Higher quality drives or enterprise drives, used in servers or more complicated storage systems, often are better performance drives and spin at a higher rate. This high spinning speed is a key aspect in the functioning of the hard disk drive. It causes the read heads to float over the hard disk when the disk is in use. The air cushion between the surface of the hard disk and the magnetic head is very small and there is no physical contact between the magnetic head and the hard disk when it is in use.

If the heads contact the surface of the hard disk when the disk is spinning then this is a hard disk crash and because the surface of a hard disk is somewhat delicate, irreversible damage such as scratching can occur. This will lead to loss of information and likely a hard drive that no longer functions.

A hard drive or computer crash can occur for several reasons. For example, moving the computer while in use is one such reason. Other reasons include the surface contamination of the actual disks, usually because the hard disk case was opened at some point, or simply because of the malfunctioning parts within the hard drive such as the read arms.