A cassette to cd converter is required to preserve analog audio recordings on tape.  Most of the recordings worth preserving are oral histories or recordings of family members young and old. Some individuals would also like to convert their current audio music cassette tape collection as well. These are cassettes purchased commercially and now there is a desire to have them in digital form.

Note that without analog cassette conversion to a CD or a digital file, audio cassette tapes will eventually become unplayable because of the lack of playback equipment and because audio tape will chemically degrade over time.

There are three main elements in a cassette to CD converter operation. These three elements are: the playback device, which in this case is an audio cassette player; an analog to digital converter, which can be in many forms; a computer with an optical disc burner to record a CD.

The player is a crucial part of the cassette to CD converter chain. You need to be able to play the audio cassette to convert it into digital form. Therefore, step one is the need for a cassette deck. Although nowadays production of machines is rather low, the purchase of new cassette decks is still possible. Also, used machines are available through used outlets such as eBay and various others. 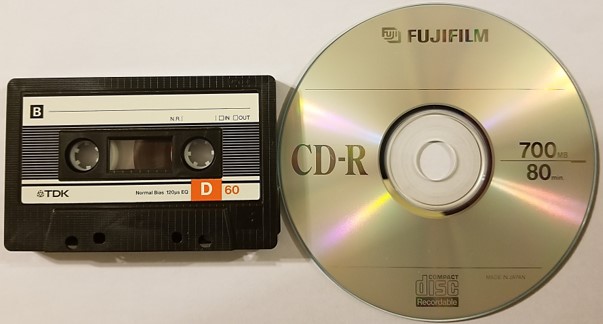 The key is to have a proper functioning machine that is delivering good audio output. If the audio output is poor, the CD produced at the end of the process will also be poor. Some manipulation of the audio is possible before producing a CD, but usually only performed on small defects. A poor-quality recording would require a lot of manipulation, so it is more efficient to make sure the signal coming out of the audio cassette tape player is good quality.

Next is the converter. The converter can be in many forms one example being a combination unit, where the equipment consists of an audio cassette tape player and a converter (all-in-one) that connects to the computer with a USB connection. Alternatively, use a portable digital audio recorder, a piece of equipment often used by reporters or by individuals to record meetings, etc. These devices can hook up to the computer via a USB connection or because the recordings are often stored on SDHC flash cards, the digital audio recording are transferrable to the computer via the card, assuming the computer has a card reader.

The last requirement is a computer with an optical disc recording drive to be able to record CD-Rs. In addition, if the desire is to edit and manipulate the audio files in any way, some audio editing software would be a requirement. When using a cassette to CD converter it is best to select a WAV file as the target digital format. A WAV format does not compress the audio and therefore there is no loss of audio information. Selecting MP3 will result in a smaller file size, but with the drawback of a loss in quality.

Once the digital file is on the computer, most optical disc burning software will allow the production of an audio CD as one of the recording options. Alternatively, simply make a CD with audio files on it, but this audio CD will not play in standard audio CD players.