Although the process is fairly simple, there are a few rules that should be followed to produce CDs, DVDs, and Blu-rays, with good burns. Note the process of recording digital information on a CD or DVD is often referred to as burning a disc, but recording a disc or writing a disc are equivalent terms.

Quality of the Burn or Recording

The quality of the burn is measured by whether the files on the disc can be read without problems or whether the disc plays without hesitating or stopping. More specifically a good quality burn from DVD CD burners means that the error rate on the disc is low after recording. Every recorded or burned disc when played has an error rate. 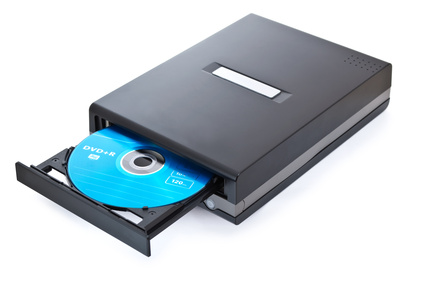 No optical disc plays without errors. However, the technology is designed to deal with this by using an error detection and correction system. When a CD or DVD is read, the data is checked and errors (which are present) are detected and corrected and the output is what it should be. The error correction system has its limits and too many errors will result in uncorrectable errors and files that cannot be read or discs that will not play smoothly.

It is imperative that when discs are burned with information, that the error rate is low. This ensures less chance of uncorrectable errors and ensures better disc longevity. The longevity is better because with a disc with a low error rate, there is a greater tolerance for damage and degradation until failure of the disc occurs. This is illustrated in the graph below. 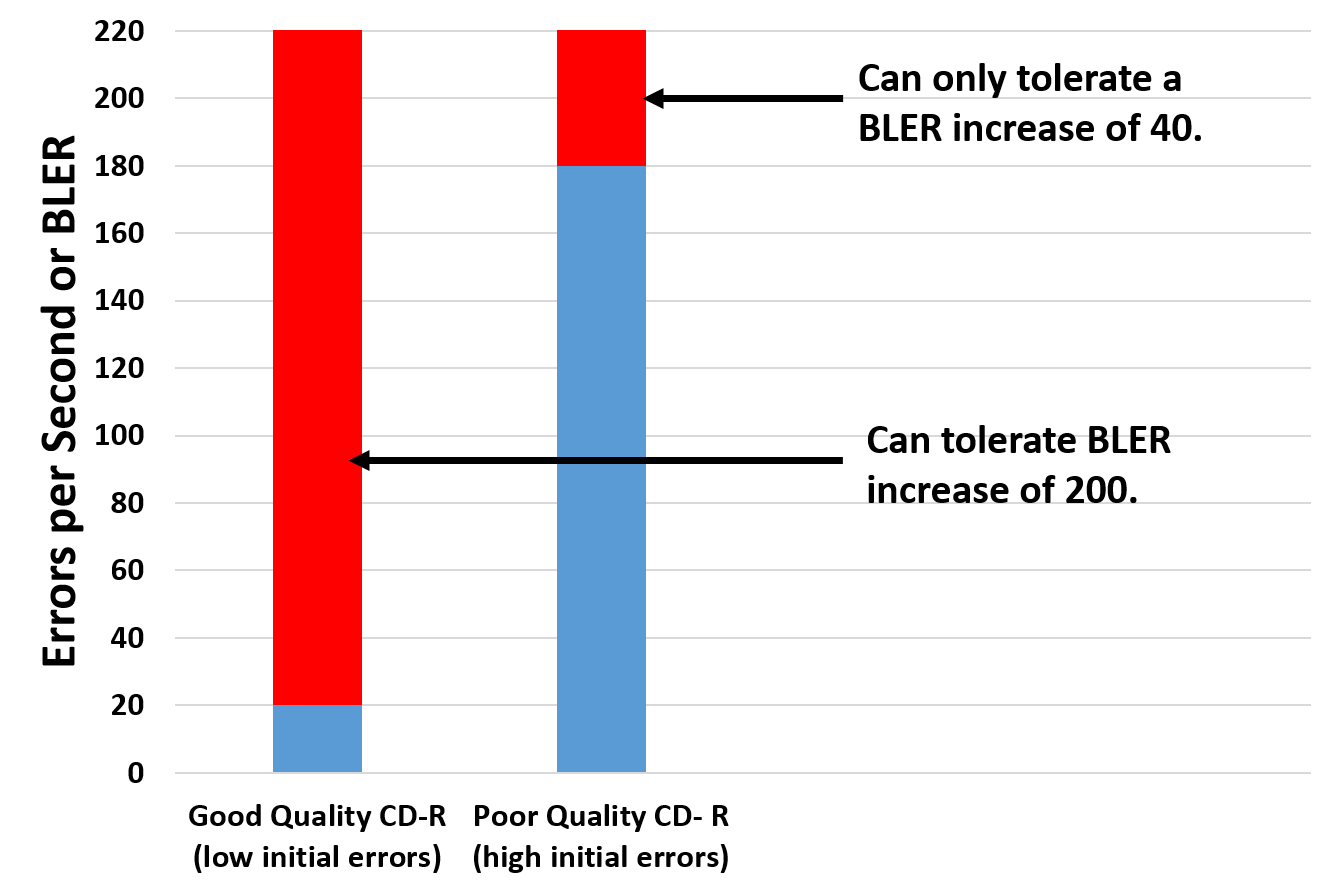 For CD formats, the acceptable error rate or BLER (Block Error Rate) must be less than 220. Above this number and failures are more likely to occur. However, the lower this number the better the disc is likely to perform and the better the lifetime. A good quality CD-R with a low initial error rate of 20 (see the blue bar on the part of the chart), has plenty of room for absorbing degradation and damage (200 BLER increase available as illustrated by the red bar) before the 220 limit is reached. On the other hand, a poor quality CD-R as shown on the right part of the chart, with a high initial error rate of 180, can only allow a BLER increase of 40 before the limit is reached. It would not take much damage or change to the disc to cause problems with this latter example.

It is not simply a matter of using the best DVD CD burner to burn CDs, DVDs, and Blu-rays. There are other factors as well. First of all, choose good quality media and avoid cheap generic brands. Make sure you use the best Blu-ray or best DVD CD burner available. Using a cheap burner will generally result in poor burns or recorded discs with high error rates. Sometimes manufacturers recommend the brand or brands of disc to use with their DVD CD burners. Adhering to these guidelines will help, but nowadays as long as you use a good quality burner and good quality disc and follow the other recommendations, your results should be good.

Prior to recording a CD, DVD, or Blu-ray, ensure the disc is free of dust and fingerprints. Blow off dust gently with a compressed air duster and remove fingerprints (avoid scratching the disc) prior to recording the media. Avoid using scratched or damaged media. The last tip when using DVD CD burners is with respect to burn speed. Record optical discs at moderate speed in order to get the best quality burn possible. CD-Rs should be recorded at about 8x to 12x, recordable DVDs at 4x to 8x, and recordable Blu-ray media at 4x for the best burns. For erasable media, aim for the middle of the recommended recording speed range.

The images below illustrate the effect that burning speed can have on the error rate of a disc. The top image is the error analysis of a recordable CD or CD-R that was recorded on a Plextor PX-716UF recordable drive at the speed setting of 4x. Total burn time was about 20 minutes. The bottom image is the same brand of disc also burned on the Plextor burner but this time at the 48x setting. The total burn time was about two minutes. As is clearly evident from the error analysis of the discs, burning at the higher speed produced a lower quality disc. The average error rate for the CD-R burner at 4x is 2.1 errors per second and that for the CD-R burned at 48x is 60.4 errors per second.

Depending on the disc type and/or DVD CD burners used, results can vary substantially. Other combinations of disc and burner type may produce little differences between the quality of discs at different burn speeds or may result in much larger error rate differences than what is illustrated here.

Below is an error analysis of a different type of recordable CD than what was used in the above example. The DVD CD burner was the same as in the above example. As is evident, the CD-R burned at a speed of 48x (the bottom image) produced a disc with a very high error rate. In fact, the disc failed halfway through the analysis, making the disc 100 percent unacceptable. The same brand disc burned at the speed of 4x (the top image) was much better in quality. The average error rate of the 4x burned disc is 10.3 errors per second whereas for the 48x burned disc the average error rate is 178.9, but the disc stopped analyzing about halfway through. This clearly illustrates that a burner can behave differently with the same disc, simply by changing the burning speed. It also illustrates that burners can have different compatibility with different disc brands.

Following the above mentioned tips will ensure that when you record you digital photos, digital audio and other information onto an optical disc, the burn will be good and discs will have good longevity with respect to the error rate level.

A final check should be performed by reading the recorded disc to ensure it is fine. If possible, try reading the disc in other DVD CD drives to ensure there is good compatibility between the disc and different equipment.

Alternatively, disc analysis software can be used to determine the quality of the recorded or burned disc. Two examples of such software are Opti Drive Control or Nero DiscSpeed. Note that by using this software you are only measuring the performance of the disc in the drive being used. Performing the analysis in a different drive can yield different results because not all drives or disc readers are created equal. Analyzing a disc in a variety of drives will give a better indication of disc quality in terms of error rate.