An effective disc cleaner is an important step for optimum CD, DVD, and Blu-ray playing and recording performance. However, there is a right way and a wrong way to clean these optical disc.

One of the most common problems with discs is that they get dirty if not handled properly and if not properly stored.

Store CDs, DVDs, and Blu-rays in clean regular size jewel cases when not in use. An optical disc should not be out of its case and left on a desk for example. This is a prime way of contaminating it with debris. To avoid getting fingerprints on the disc, do not touch the disc surfaces. Always grab the disc by the hub with your forefinger and the outer edge with your thumb as illustrated in the picture below. 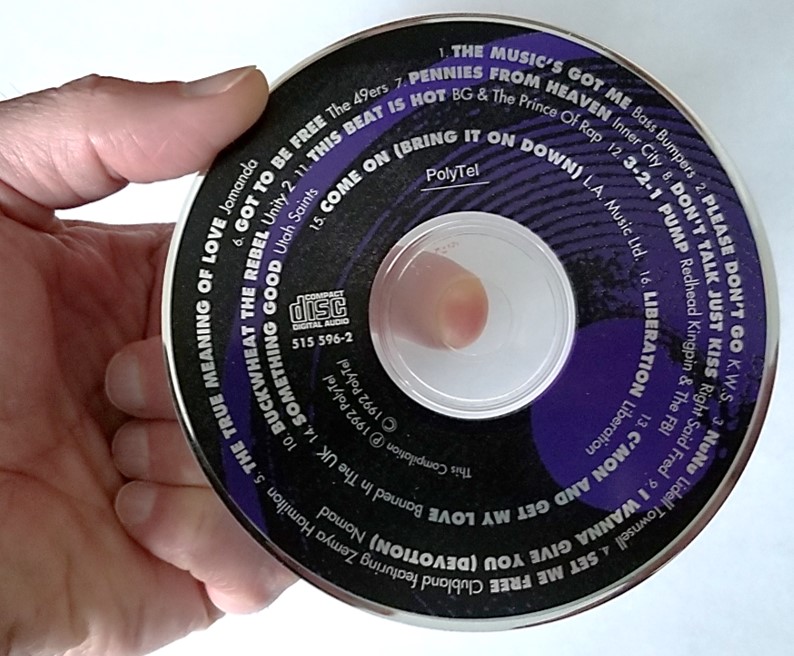 The most common sources of dirt are particulate debris such as dust or greasy debris such as fingerprints. Both sources of contamination, either separate or together, can affect the playback performance of the disc. The proper recording of recordable and erasable media will also be affected if a disc is dirty. Problems can range from localized errors to an optical disc that will not play at all in situations where the disc is more heavily soiled. Therefore, it is a good idea to clean a CD or other optical disc with a disc cleaner prior to playing it or recording information on it.

Loose debris on a DVD or other disc is usually dust, but may include other sources of dirt. Clean discs with loose debris by using a compressed air duster as the disc cleaner. Gently spray the air over the base of the disc to remove the debris. Spray the top or label side of the disc as well to avoid transferring the debris into the equipment when playing the disc.

As a second choice for cleaning, one can wipe the disc with a soft non-abrasive and non-scratching cloth. This is riskier than using compressed air because there is a chance of scratching the disc. Wipe the CD, DVD, or Blu-ray disc in a radial direction from the hub portion of the disc moving outwards towards the other portion of the disc. Do not clean the optical disc by wiping in a circular direction as done with old LP record albums. Cleaning by wiping in the circular direction is a problem because if a scratch occurs it will be circular. Circular scratches are more problematic for players to deal with than radial scratches.

The presence of fingerprints on discs such as CDs and others is a common problem. Fingerprints on the label side of the disc will not affect readability, but fingerprints on the base of the disc will interact with the laser light that reads or records the disc and create problems. Fingerprints are removable with a soft cloth and wiping as described above. However, if the prints are very greasy, then a soft non-abrasive damp cloth can be the disc cleaner. Alternatively, a damp soapy cloth (use dish washing liquid) can be used. The presence of the soap will do a more thorough job at removing the greasy debris. Finally, if the disc is very greasy and dirty, then the best disc cleaner is a wash in soapy water with wiping.

After cleaning the disc, blot off the excess water with a lint-free soft cloth and let the disc air dry. It is best to wait a few hours before playing the disc. Also, only immerse optical discs that do not show any signs of damage, otherwise separation of disc layers may occur. Finally, avoid wetting discs with adhesive labels on the top surface of the disc.