DVD R or recordable DVD media is similar to the CD R format in terms of the materials used to construct the disc. This type of DVD is a write-once format and so once the disc is full, the only thing that can be done with the disc is to read it. A big advantage of the DVD recordable disc over the CD recordable one is storage capacity.

A standard single layer DVDR can hold 4.7 GB of digital information which is 6.7 times more than the CD. The recordable DVD is also available in a dual layer format (two layers than can store information as opposed to only one in a standard DVD-R or CD-R) that provides 8.5 GB of storage space. The maximum rated recording speed for DVD R is 16 times (16x).

The DVD recordable disc is available in two formats the DVD-R and the DVD+R. Two different manufacturing groups could not agree on a common standard and therefore, two different formats are available in the marketplace. 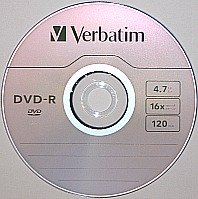 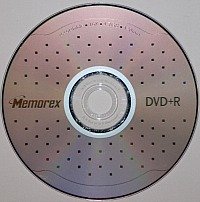 The -R format was introduced about 5 years prior to the +R format and therefore, had a good head start in terms of sales and nowadays tends to be found and used more often. There are some technical differences between the two formats such as the +R format using a different system of tracking and speed control and a different error management system. Both of these differences are supposed to make the +R format the better format, but for the average user these differences are not that significant and both formats are used in a similar fashion or interchangeably. In general, DVD-R has shown better compatibility across many different recording drives an this makes it the preferred choice over the DVD+R.

A cross-section of a single layer recordable DVD is provided below and its construction begins with a base layer. The base of the disc is a clear polycarbonate plastic layer that is half the thickness of the CD-R base layer. Like the recordable CD, the recordable DVD has a spiral groove molded into the top of the plastic. This groove is wound tighter in the DVD than in the CD and this is one reason why a DVD-R can hold more information than its CD counterpart. 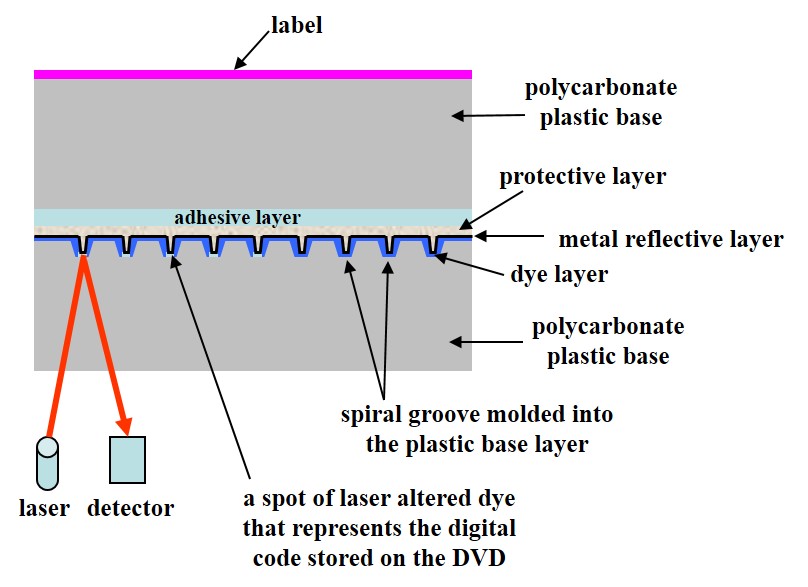 A dye layer is then added on top of the groove and plastic base and this is where the information is stored. A recording laser alters the dye in tiny spots (by heating it) in the groove and the spots are equivalent to the molded pits in the plastic base of read-only media. These spots represent the digital code of the information that is stored and are about half the size of the spots in a CD-R. This allows more spots to be placed on the disc and therefore a greater disc storage capacity.

Finally, a second blank or "dummy" polycarbonate disc is added on top so that the thickness of the disc is the same as a CD. This blank or dummy disc is half the thickness of a CD (like the base) and is glued to the rest of the disc structure with a bonding adhesive. A label is then silk-screened onto the top.

For dual layer recordable DVDs, a schematic of a cross-section of a typical disc is shown below. Both information layers are read from the base side of the disc. When the end of the first data storage layer is reached, the laser needs to make a slight adjustment in order to focus on the second data layer. This will usually trigger a very small delay.

Also, in order to be able to read the second layer, the metal layer closest to the base is a semi-reflective metal layer. This type of metal layer allows some laser light to pass through it so that the second information layer above it can be read. 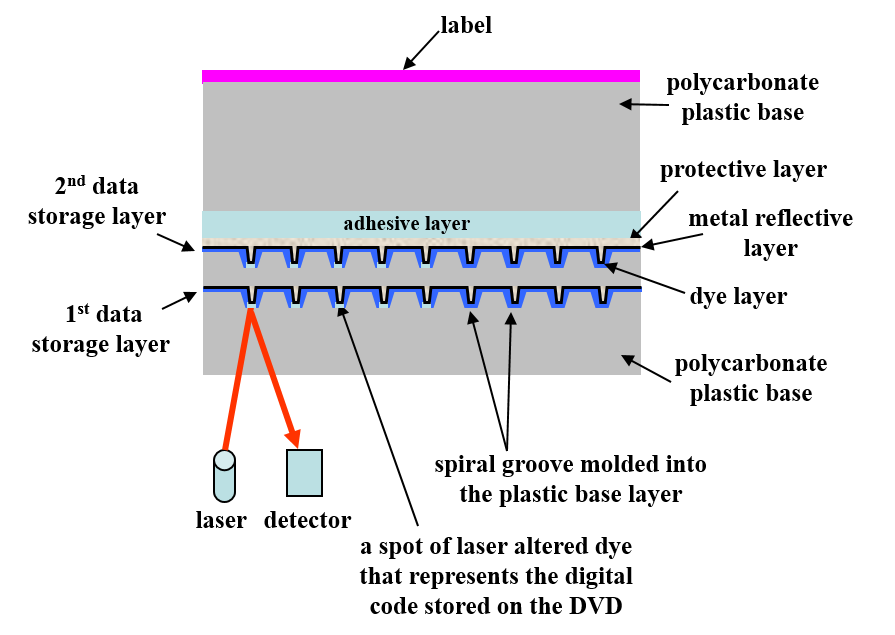 Although there are concerns about DVD recordable disc stability due to the less stable dye and adhesive used in the disc structure, some still prefer to use this format because of the greater storage capacity, which is required for certain digital information. If using DVDR for long-term storage of digital scrapbooking creations or storage of other data or files, it is recommended that only single layer DVD recordable media are used.

A research study, "The Stability of DVD Optical Disc Formats,"published in the journal Restaurator, has shown that the dual-layer DVD-R/+R has very low stability relative to most other types of optical disc media. It's average lifetime range is 5 to 10 years, even if stored under recommended conditions. Dual-layer media also encounter problems when recording and therefore, use of this format should be avoided. For the single data layer recordable DVDs, the lifetime range is 10 to 35 years. The DVD+R format showed better stability in tests and the longevity of these discs is more towards the upper end of this range. The DVD-R format proved to show more reactivity in tests and thus lower lifetime. Despite the shorter longevity, preference should be given to the –R format over the +R format due to better disc and equipment compatibility.

Recordable DVDs with the gold metal reflective layer are more stable. Research has shown very good stability with lifetimes predicted to be in the 50 to 100 year range for these discs. The inert metal layer does provide excellent stability and the dye generally used in this type of media appears to be more stable than standard DVD R dyes.