Disc rot and laser rot are terms used to describe the degradation of optical discs. It can often be referred to as CD rot and DVD rot as well, depending on the format of optical disc that is affected. However, this type of deterioration is not an actual rotting of the disc and it is not the laser light causing the problem. This page takes a closer look at what disc rot is actually is all about.

Role of the Metal Layer in Optical Discs

All optical discs contain a metal layer within the disc structure. The purpose of the metal layer is to reflect the laser light from the player or reader back to the equipment’s signal detector after the data or information layer is read. This allows a signal to be registered by the equipment by a photodetector. Without the metal layer, the laser light would read the data layer and then shine right through the disc and the detector would never receive any information from the disc. Therefore, the metal layer and the integrity of this metal layer is a vital component in the proper functioning and readability of optical disc formats.

The composition of the metal layer differs depending on the disc format. A summary of the types of metals used is provided below.

Disc rot and laser rot are the chemical degradation of the metal reflective layer. Metals used in optical discs will oxidize or corrode when exposed to moisture and oxidizing compounds. These oxidizing compounds can be from the oxygen in the air we breathe, atmospheric pollutants, volatile agents coming from poor quality storage enclosures, inks and labels on the discs, paper or other materials stored in the case with the disc, etc. When CD disc rot or DVD disc rot occurs the metal layer may discolor, may form holes (from very small pinholes to large holes to complete disappearance of the metal layer), or the metal layer may get thinner and the label from the other side of the disc becomes visible from the base side. If any of these are noticed, then laser rot is the likely problem.

The exception is gold. Gold is an inert metal and will not oxidize when exposed to chemical compounds. This is one of the reasons that make it an attractive metal for jewelry, because it does not change over time. Archival CDs and archival DVDs use gold in the disc construction for this same reason. It will not chemically change and contribute to the degradation of the disc.

Early audio CDs did not have a good quality protective layer and many discs failed because of this type of degradation. Laserdiscs also suffered from this problem. The formulation for the protective layer was adjusted once it was noticed that this deterioration problem was common. Nowadays, laser rot can still be a problem, especially in poorly manufactured discs.

Below is an example of an audio CD that has suffered disc rot or cd rot. The view is from the base of the disc. The metal layer has deteriorated on about two-thirds of the disc and the label from the top side of the audio CD is starting to show through. 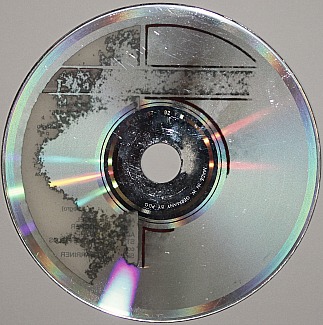 Laser rot can also occur with DVD movie discs as illustrated in the image that follows. Spots of missing metal reflective layer are present as well as discoloration of the metal, especially on the outer portion of the DVD. 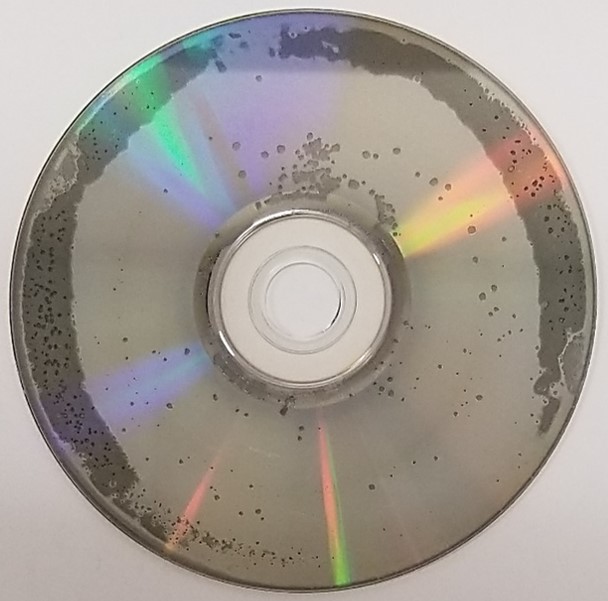 Another example of DVD rot with a movie disc is provided in the following image. 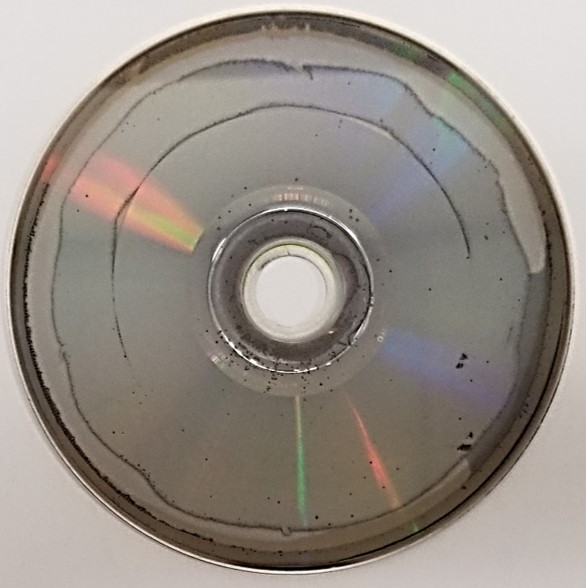 As in the other examples, the metal reflective layer of the DVD disc has been damaged. This has caused the formation of some holes in the metal as well as non-uniformity and thinning of the metal layer. This DVD and the other examples shown are unreadable optical discs.

Note that disc rot has been encountered with laserdiscs, CDs, and DVDs. It has not been readily reported in Blu-rays. This could be because Blu-ray discs have not been around as long as the other formats or because of the added protection provided by the cover layer on the disc. This layer is not present on CDs and DVD.

This type of degradation is not repairable. The metal reflective layer has to be uniform to perform its role properly. This type of uniformity can only be achieved under disc manufacturing conditions. Therefore, any attempts at laser rot repair will be unsuccessful. The error correction system associated with optical disc technology may or may not be able to compensate for the damage. This depends on the extent of the damage because the capacity of the error correction system is limited and eventually extensive laser rot will cause playability problems or disc failure.