Blu ray technology in terms of the Blu-ray disc structure varies in some key ways when compared to CDs and DVDs.

The size or diameter of Blu-ray disc media is the same as compact disc or digital versatile disc media. The thickness, size of the centre hole, etc., are also the same. However, when looking at a cross-section or slice of the disc there is a significant difference between the Blu-ray disc structure and that of a CD or DVD.

To examine blu ray technology in terms of how a disc is put together, the focus will be on read-only discs such as Blu-ray movie discs. Other formats such as recordable and erasable/rewritable have additional layers than those discussed here to record the digital information. However, the general location of the layers is the same within the disc.

Below is a schematic of a cross-section of a Blu-ray read-only disc with a single data or information layer. 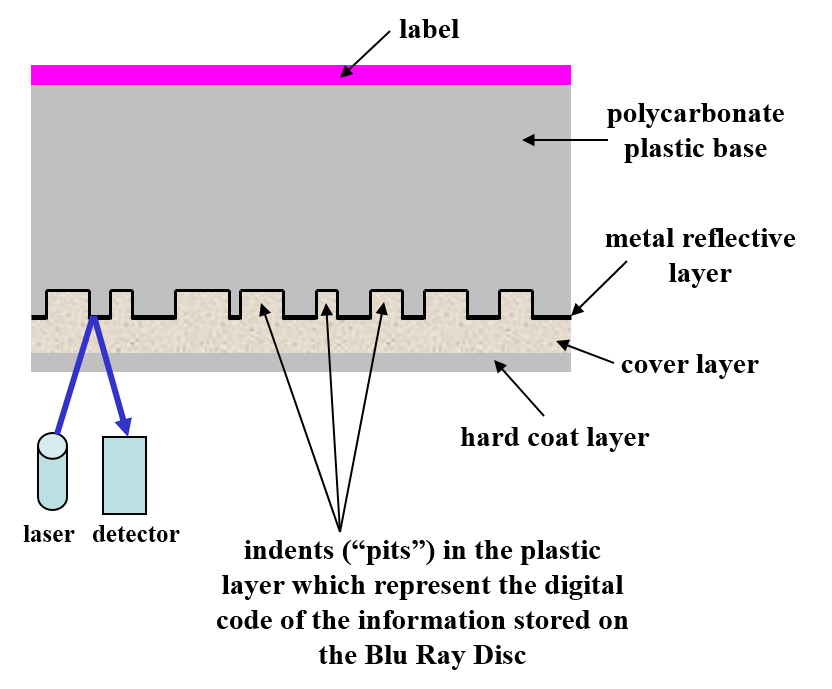 The most obvious difference between a Blu-ray disc and a CD or DVD is the position of the data layer, metal reflective layer, and protective layers. For a CD, these layers are near the top of the disc and for a laser to read the data layer, it has to travel through about 1.1 mm of plastic base. Therefore, the optical clarity of the polycarbonate base is extremely important. Also, because the laser is focused well into the disc structure, flaws on the base surface such as minor scratches and dirt will not cause significant problems when the CD is being played or read. The laser light beam at the base of the disc is unfocussed and broad and minor imperfections will not affect the laser light path.

For a DVD, these layers are in the middle of the disc structure. The laser in this case has to travel through 0.6 mm of plastic base in order to reach the data layer. Once again optical clarity of the plastic base is very important and because the laser is focused deep (although not as deep as the CD) in the disc structure, there is some tolerance for minor scratches and dust although not as much as a CD.

Blu-Ray Data and Other Layers

The next layer after the hard coat layer is the cover layer and it is 0.098 mm thick. The cover layer will protect the data layer underneath and provide separation so that the laser can properly focus on the data layer. The hard coat layer is a specially formulated material to prevent scratches, dirt and dust build-up, and fingerprints. Having a layer that will resist these elements is a critical component in blu ray technology because the focus point of the laser is very close to the base of the disc and any irregularity in the base will interfere with the laser light beam. Without a resistant hard coat layer, Blu-ray discs would experience plenty of read or play problems. Also, because the data layer area is so close to the base, extra protection from physical damage is needed when compared, for example, to a DVD where the data layer and metal layer are encapsulated in thick plastic. Both hard coat and cover layers obviously also require excellent optical clarity since the laser needs to pass through them to read the disc.

After the cover layer, the molded pits are found. These different sized pits represent the digital information stored on the disc. A metal reflective layer is then deposit on the pits in order to make the disc readable. Now, in blu ray technology, the thick plastic portion is actually the top side of the Blu-ray disc and not the base. The laser does not travel through the plastic base to read the disc. Instead, the laser will only travel through two very thin layers, approximately 0.1 mm in total thickness. The structure of a read-only disc is completed with a label placed on the top surface.

These are the main structural differences in the disc layers between a Blu-ray disc and a CD or DVD. Of course, a Blu-ray disc also has smaller size “pits” (which contain the digital code) than a CD or DVD and also the track of pits are closer together in a Blu-ray disc. To read these smaller “pits” a blue laser which has a shorter wavelength is required. Note that read-only Blu-ray discs can be found in a single or dual data layer format. The CD can only have a single data layer and the DVD can have up to four information storage layers depending on the format.

Stability or Longevity of the Read-Only Blu-ray Disc

Little information exists on the stability of the Blu-ray read-only format. One study that looked at the accelerated aging stability of blu ray technology movie discs was discussed in the following paper, "Blu-Ray Media Stability and Suitability for Long-Term Storage." The paper concluded that the stabilities of both the single-layer (SL) and dual-layer (DL) movie formats were very low, especially when compared to the audio CD. Overall, the stability was only slightly better than DVD movie discs.

When comparing with the longevity values of other optical disc formats, a reasonable average lifetime range for the read-only Blu-ray disc format is 10 to 20 years. This lifetime range assumes reasonable good temperature and relative humidity storage conditions as outlined in the optical disc standards. Because of the poor stability of these discs, they should be evaluated every 5 years and consideration should be given to storing the discs cooler and drier in order to extend their lifetime.