The DVD audio disc, also known as the DVD-A disc or DVD-Audio was released in late 1999. Although DVD movie discs contained better quality audio than the CD could provide, the DVD movie discs were not audio specific discs. Because of this, there began a movement to develop a high quality audio specific DVD. This is a read-only DVD format and so it can only be read and no new information recorded to it.

For audio CDs, the sampling rate is 44,100 samples per second and each sample is represented by a 16-bit binary number which allows for 65,536 discrete sounds. The sampling is done in stereo mode or in other words 2-channels.

For audio DVDs, there is more storage space available to store audio, about 7 times more storage capacity. With this extra space you can store more CD quality audio or store a similar amount of audio but at a higher quality. The higher quality in the DVD audio disc or DVD-A disc is represented by a sampling rate of 96,000 samples per second (about double that of the audio CD) with each sample being represented by a 24 bit binary number which allows for over 16 million discrete sound levels. Linear PCM is used to store audio on the DVD and it is stored uncompressed or with lossless compression.

More Options Other Than Stereo Sound

The extra storage capacity provided by a DVD disc also allows more than the stereo sound or 2-channel audio provided by the audio CD. The DVD-A can provide audio channels from mono to 5.1 surround sound or up to 6 channels. 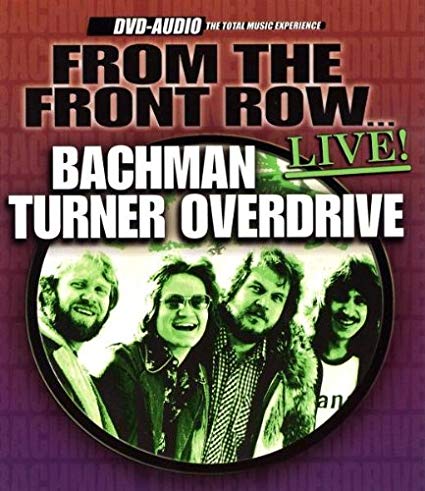 Another difference between the audio CD and the DVD audio disc format is copy protection. Unlike, the audio CD, audio DVDs have a copyright protection scheme in place to prevent unauthorized copying or "ripping" of the high quality audio content. However, many of these schemes have been cracked, similar to what has occurred with the DVD movie discs.

One of the problems with the DVD audio disc was that the early DVD movie players could not play the audio discs. Players equipped to deal with the DVD-A format were necessary in order to play these discs. This was one of the reasons why this format initially did not really gain much popularity in the marketplace. Another reason for lack of interest in this format is the competition from the Super Audio CD, a format that provides better sound than a standard CD and some claim even better sound than the audio DVD format. With the presence of two competing high quality audio formats, consumers for the most part are not choosing one over the other, but instead are staying away.

The amount of titles available in the DVD-Audio format is generally low and this has not helped consumer acceptance as well. Finally, for the majority of music lovers, the higher quality audio formats do not provide much of a benefit for them. For many, the better quality audio is indistinguishable from the quality provided by the CD, especially when listening to the music in lower end audio systems that are possessed by most consumers and therefore, there is no reason to dive into a new format. With the popularity and versatility of mp3s, and the method in which audio is being listened to nowadays, the majority of consumers have no need for DVD-A and the very high quality audio sound that it provides.

Outlook for the Audio DVD Format

Although popularity of the DVD audio disc is low, the format is not dead and new releases are appearing all the time. However, what do the sales statistics show? The RIAA (Recording Industry Association of America), provides sales data on different types of music formats. The sales data from 2001 to 2017 in terms of millions of DVD-Audio units sold in the U.S. is provided in the following chart. 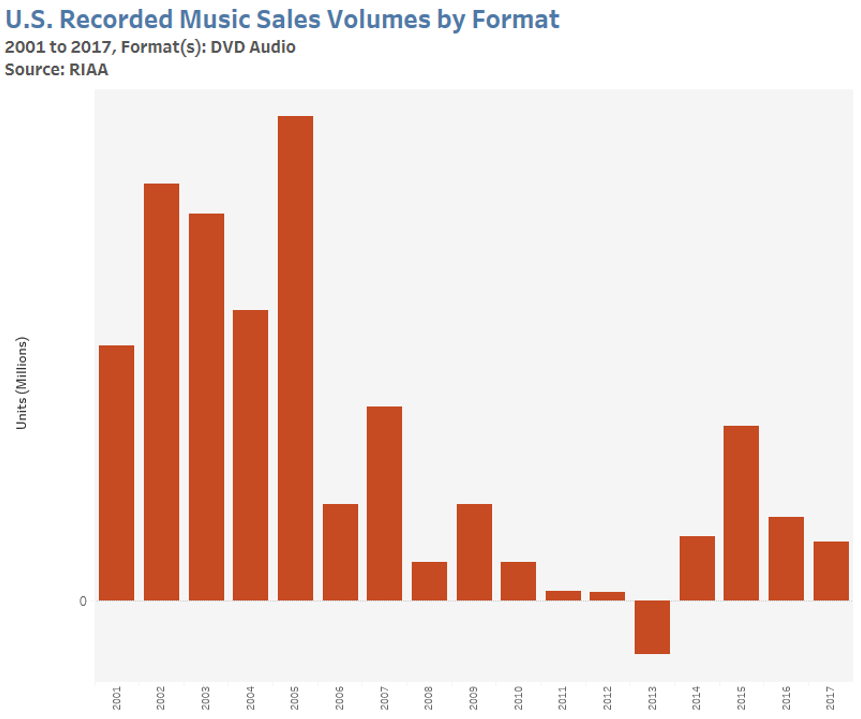 The top of the chart is 0.5 million units. From the chart it is evident that the format was most popular in the first five years after it was introduced. However, in 2006 sales dropped and have remained low since. In 2007, approximately 0.1 million units were sold. So indeed, the format is still around but not in great demand.

We can contrast the audio DVD disc sales with the audio CD sales to get an more accurate picture of the format popularity. Sales in million of units in the U.S. from 1983 to 2017 are shown in the following bar chart.

At first, the Audio-CD was slow to be accepted but there was a yearly rise in sales after 1983. In 1999 and 2000, the sale of Audio-CDs peaked at around 950 million units. In 2017, 100 million units per year were still being sold, even after a steady yearly decline in sales.

These numbers put in perspective the limited popularity of the DVD audio disc. At the peak in sales, the DVD-Audio sold about 0.5 million units versus 950 million units for the CD-Audio disc. That is 1900 times more sales for the CD format. In 2017, the Audio CD is still quite a bit higher in sales at 1000 times more.

Overall, compared to other formats, the demand since introduction has been very low for the DVD audio disc and sales are not likely to improve in the future.